There's been a hostelry on the corner of Hurst Lane and Sedgley Road West in Tipton since at least the 1860's. The Five Ways Inn stood on the site at the beginning of the 20th century until it was demolished in 1923. It was replaced with the Doughty Arms Inn named after Councillor William Woolley Doughty, who had been a chairman of the Tipton Urban District Council.

The Doughty Arms was bought in 1987 by the Little Pub Company who renamed it "Mad O'Rourke's Pie Factory".

During this period some famous comedians performed at The Pie Factory, namely Frank Skinner and Victoria Wood.

Colm O'Rourke, who owned The Little Pub Company sold the company in 1999 to Ushers of Trowbridge who spectacularly ruined the company. Colm & Sheena O'Rourke then retired to Cornwall and on August 1st 2000 Peter Towler, who had worked for Colm for many years, bought the Pie Factory.

The Towler family still own the Pie Factory and have built the business back to what Colm & Sheena would be happy with. 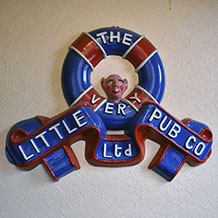 Mad O' Rourke's Pie factory was built in 1856 and was equipped with shell die presses from the Royal Ordinance works at Bilston.

The problem of the pastry being so hard was overcome when it was realised that the pies had a very long shelf life. This made them very popular particularly with the shipping and military people in the pre-canning days. It was for this reason that the works was granted a full on licence to encourage production and overtime.

However, it was in the Crimea war that the pies reached ultimate fame. A regiment of the 'Staffordshire Light Headers', besieged and running out of ammunition, were facing annihilation when Private Eric Crump, a Gornal gunner remembered that the pies they were carrying were the 562 gauge, the same as the guns. He rallied the men and loaded the guns with the fearsome pies and gun powder. The casualties to the enemy were so devastating, with cracked skulls and deadly pork shrapnel that they soon surrendered bringing the war to an end. Eric Crump was awarded the 'George Pie' medal for outstanding ingenuity in the face of the enemy.

Queen Victoria was a frequent visitor to the Pie Factory.
It was rumoured that she was having an affair with Mad O'Rourke and that this was when Mad O'Rourke was first introduced to wine.

The most fortunate part of his relationship with the Queen was that she bequeathed him the famous Irish vineyard at Ballykillferret for his services to the realm. This famous vineyard, better known as 'Chateau Ballykillferret' is located 182 nautical miles due East of the lovely Wicklow mountains. As the wines of this famous vineyard are exclusive to our own pubs it has given the wine almost celebrity status.

Other famous visitors included 'Rudyard Kipling' whose son trained here before going on to open his own cake factory and Lord Lucan was sighted at the Pie Factory but mysteriously disappeared (A few complaints were made about the pies being a bit tough the following week!)

The factory was extensively re-built in 1923 after an explosion caused by a loud Bang!  It was re-designed
by 'Le Courbossier' and has the only Art Deco cowtrap
in Europe.

The factory produces 17500 pies per day plus VAT and they are all prepared to a unique set of recipes, known only to three people, the parish priest and a cat.

not so mad history